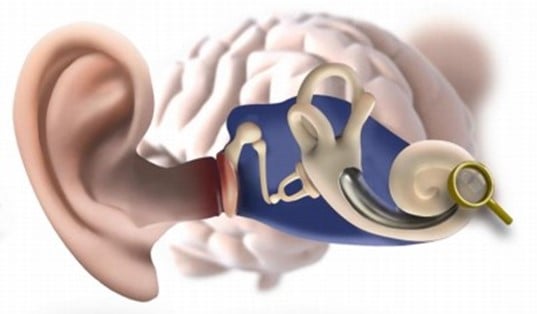 The Outer Ear is made up of three main parts:

The Pinna – This is the part on the outside of your head. It’s job is to collect sound from the environment. The furrows, ridges and channels in this part of your ear are all designed to do this in an efficient and effective way.

The Middle Ear is more complex but there are three main components. Here’s what it looks like >

The Ossicles – are small bones in your middle ear. There are three of them that articulate together known as the Malleus, Incus and Stapes or the Hammer, anvil and stirrup. Their job is to transfer sound vibrations to the inner ear. The eardrum sets the Malleus in motion which in turn moves the Incus then the Stapes. The flat plate at the bottom of the Stapes provides the connection to the inner ear.

Middle Ear Muscles –  The Ossicles are also connected to two muscles.The Tensor Tympani and the Stapedius. These muscles have two jobs. They hold the Ossicles in place and also protect the inner ear from sounds that are too loud by way of reflex.

The Eustachian Tube – This tube connects your middle ear to your Nasopharynx. It is 2.5-3cm long and usually closed. It opens by way of reflex and its purpose is to equalise air pressure between the ear canal and middle ear. It also allows for the drainage of mucus from the middle ear.

The Inner Ear – This is highly complex and consists of two main organs both of which have many functions. The semi-circular canals form part of the vestibular system responsible for balance. The Cochlea separates incoming sound by frequency and converts the physical vibration of aid molecules into patterns of electricity that the brain then interprets.

Now we know the basics of ear anatomy and how the auditory pathway works it’s time to take a look at the  different types of hearing loss, their causes and what they mean for the person experiencing them.

Hearing loss can be caused by a number of things but it is usually defined as one of three different types. Sensorineural hearing loss, conductive hearing loss and mixed hearing loss. Each description gives us an idea of where in the auditory pathway the problem occurs.

Sensorineural hearing loss – Derived from the terms sensori and neural. The sensory aspect of the loss is located in the cochlea and occurs when the tiny hair cells that detect sound in the ear are injured, diseased, do not work correctly, or have died. The neural aspect occurs when there is a problem with the central auditory nervous system. It can be difficult to distinguish whether the loss is entirely sensory, neural or a combination of both and so we refer to these types of losses as Sensorineural.

This type of hearing loss can be caused by lots of things but most commonly ageing (age related hearing loss is called presbyacusis), childhood infections such as measles or mumps, Meniere’s disease or regular exposure to loud noise amongst other things. Most of the time this kind of hearing loss cannot be reversed.

Conductive hearing loss – This occurs when there is a blockage or a mechanical problem in the outer or middle ear. For example the Ossicles may not be conducting sound properly or the eardrum not vibrating in response to sound.

Again, this can be caused by different things including: A blocked ear canal (due to wax or a foreign body), damage to the ossicles, fluid build up behind the eardrum (known as effusion) or a perforated eardrum. Sometimes this kind of hearing loss can be reversed depending on the cause.

Mixed hearing loss – It is possible to suffer from a combination of the two types of hearing loss mentioned above. This means that not only is sound being blocked from reaching the cochlea but there is also damage to the hair cells or other structures in the auditory pathway. When you have a hearing assessment the results are plotted on a graph called an audiogram. The audiogram will tell us what kind of hearing loss you have.

Hearing loss can also be categorised by severity being described as either mild, moderate, severe or profound.

Conductive loss is thought to make everything sound quieter, so it’s like turning the volume down equally across frequencies.

Sensorineural loss is very different. This cannot be overcome by bone conduction. Which part of the cochlea or auditory pathway is not working, will determine what someone can hear. For example, if a person has normal hearing in the low and mid range frequencies people may sound as though they are speaking at normal volume but mumbling.

Hearing loss can affect different people in different ways. This is often dependent on how or when a hearing loss was acquired, whether it is a congenital loss, the type of loss or the severity. For example someone with congenital hearing loss may not see it as a disadvantage or disability but rather as just a part of who they are and more importantly a part of their cultural identity (this is not true for everyone).

Someone with an acquired hearing loss may have a completely different perspective. For people with acquired hearing loss it is often exactly that, a loss. Something is missing. This often leads to social bereavement and isolation. The important thing to remember is that most of the time there is a hearing solution available to aid hearing rehabilitation. Often this comes in the form of hearing aids, but these are only part of the solution.

Your hearing care provider will offer hearing instruments alongside other modes of rehabilitation on the journey back to hearing. This will include counselling, training around communication techniques and expert hearing assessment coupled with a quality hearing aid fitting.